Have a great day!
Brittany
Posted by Em and Brittany at 6:58 PM No comments:

It is Em! Today I am going to talk to you about the Puppy Mittens (Pattern #4) in the 60 Quick Knits book.


These puppy mittens were a breeze to make! I finished them in 2 hours.  That includes the ears, mittens and the assembly of the project.   And now I have these cute little mittens without an owner.  I was thinking of saving them and using them in my classroom if anybody needed extra mittens.  They are warm, but easy to make, so if a kid loses them, it isn't the end of the world.  Otherwise, I might give them away as a baby shower gift.

Like the bunny mittens, they consisted of making a deep ribbed mitten and adding ears and buttons as attachments. This didn't surprise me because the designer of the Bunny Mittens made the Puppy Mittens as well.

I did not add the buttons, because I didn't want a little child to be tempted to bite them off! (I'm a paranoid Early Childhood Teacher)

There really isn't much to say about these mittens...they were a fun quick knit to make.  There are no errors that I found in these mittens.  Perfect for any young child.

Happy Knitting,
Em
Posted by Em and Brittany at 12:36 PM No comments:

Here is our latest progress report. This month our goal is to finish another 5 projects. Tally for beginning of January progress is in blue followed by the new tallies in purple! :)

Have a great day!
Brittany
Posted by Em and Brittany at 7:58 PM No comments:

It is Em!  I've been busy knitting as much as possible because I am still on break before the big student teaching adventure begins!!!  My goal, of getting three knitted projects done, is going well. I'm one third of the way done!!!  However, I'm looking at what needs to be done and most of the projects are scarves...

Today I am going to talk about the Twisted Ribbed Hat (Pattern 54). 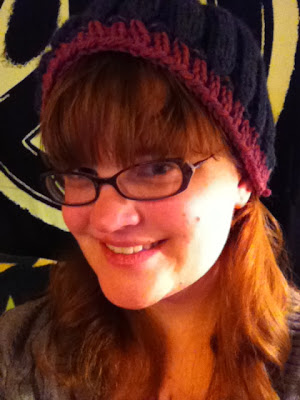 This pattern was my first top down hat.  I must say I was pretty upset when I started this pattern.  I tried making the ribbed bonnet (Pattern 16) and failed.  I didn't like starting with double points and then making more and more stitches.   You actually double your yarn, which makes the knitting thicker and more difficult to do.  It really bothered my hands, so I gave up and made Brittany do the project.

Well, wouldn't you know this hat used the same technique?  The Twisted Ribbed Hat and the Bonnet are siblings: the same designer made them both! So once again, I casted on my stitches with my doubled yarn on my DPNS and went to work. Determined to be able to do it, I worked on my hat.  At first it was really hard to see how the hat was working out.   You can see in the photo below how oddly shaped the first part of the hat actually was. 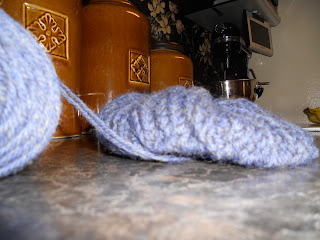 I was pulling and pulling the stitches around my circular needle.  The stitches were tight.   I had the correct amount of stitches on the needle, but I think because I was so close to the top, the stitches were being pulled into several different directions.   In the photo below I had to actually pull and adjust the stitches to go into a circle.  About an inch later into the pattern, the hat began to take the form of a hat all by itself.  I just had to have patience! 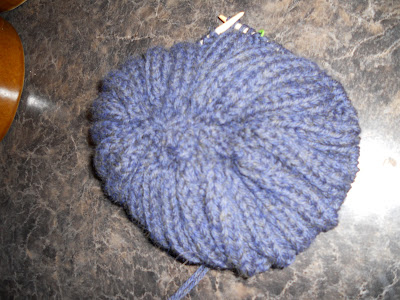 The more I knitted with the hat, the easier it became.  I still had to push my stitches around my needle (I believe that is my circular needle's problem and not the pattern), but it became so much easier.  I started knitting this pattern more and more...

Then my circular needle broke....that was a bummer...I lost about 10 stitches of my hat.  It was hard to fix because A/it was a little dark and B/I was trying to watch Tangled! I stopped my movie and worked on those stitches for about 30 minutes.  After some work and creativity, I picked up my stitches. 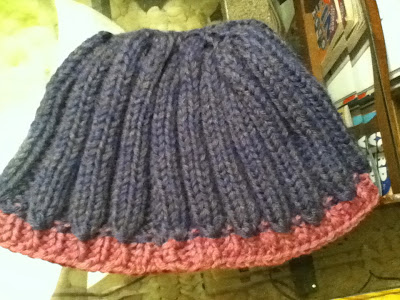 Then, I ran out of yarn!  Once again, I failed to read the instructions and didn't see the 2 skein requirement.  But to my defense, I don't think I've ever made a hat that required more than 1 skein!!! So when I ran out of yarn at 2:30AM, I just looked for another skein that would match.  I found a nice wine purple to use for the bottom ribbing.  I think it makes the hat look unique. 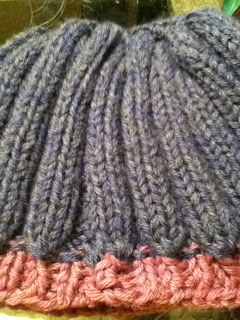 I'm very satisfied with my hat...it fits (for the most part, I have a big head), it is comfortable and soft! I used Cascade 220 Heather 9326 and Cascade 220 Heathers 9454 for the ribbed edging.  (My ipod doesn't always capture the true color of the yarn, so the colors appear lighter when they are not.) 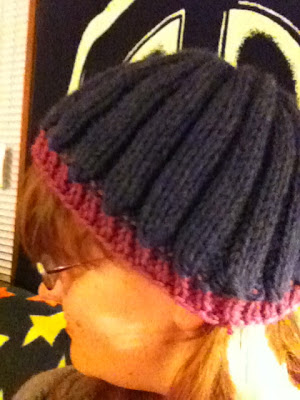 That's all for now!  Have a great one knitters!!
Em
Posted by Em and Brittany at 11:58 AM No comments:

Greetings Everybody It is Em!

I'm so happy to say that A/we completed our finish five project goal and B/our "waiting to be started" is now officially under 10 projects!  We really are on the downhill of our progress.  Our goal to finish is the end of June 2012, so we are doing pretty good.  I am going to set my own personal goal for the next month.  My goal is to finish 2 projects in the 60 Quick Knits world.  One MUST be part of my "in progress" projects that are just sitting and collecting dust.

Today I am going to write about Project 8: the Lion Scarf. 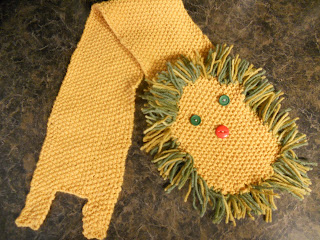 I really liked this project.  It was a simple, fun and relaxing project to work on.  In fact, the majority of the time I was watching a movie while knitting this piece!  What I love about (the original) 60 Quick Knits Book is that there is a very good balance of projects.  Some projects are indeed easy, such as this Lion Scarf while others are an enjoyable challenge (Leaf-Lace Gauntlets)  I have not had much of an opportunity to work on any scarf with a seed stitch since I first started knitting.  I feel that the seed stitch made this project interesting, verses just boring garter stitch.

I did make this scarf shorter.  That is because the person who will be wearing my scarf is really tiny...right now, he is only a few days old!!!  (He was born on Christmas Day!)

I made a video to describe how to put on the tassels for this scarf.  I did this because I was struggling to find a great way to explain it written out.  When I was first starting to knit, I had a really hard time with the finishing (wait...I still do!) and I wish that somebody told me how to do it instead of just looking at it in a book.   I added extra commentary about the scarf as well too.  I also learned how to add those little speech bubbles you see pop up on youtube videos, so you'll see some of my comments (and a little bit of my cheesy humor) pop up on that as well!  Clink on the link to see the video!

I mention in the video over and over again that "you need to plan" the right amount of the tassels.  I would advise cutting about 3.5 inches of tassel instead of the advised 5 inches of tassel.  I had so much that I was chopping off that I could have gotten away with doing it shorter.  I also did not use a guideline, that is, a piece of yarn gently woven in where I was supposed to put the tassels.

Also, if one feels that I did tassels differently, this was the way I learned how do to tassels.  I find them to be quick to do when done in this fashion.  Also, it still gives a clean edge. 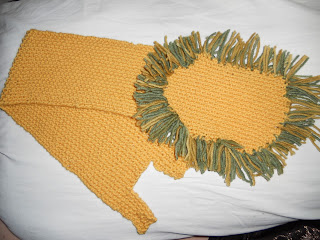 Finally, for the finished product, I didn't add the tail.  I just don't like crocheting.  (Sorry Brittany!).  I picked out a button for a nose instead.  I like buttons and I didn't want to go digging for a small piece of fabric, since I don't really have any fabric at home! 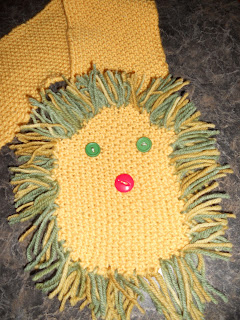 Yarn I used for the scarf: Cascade Superwash and Unknown Yarn.  (I know it was 100% wool, which I KNOW defeats the purpose of Superwash, but the colors lined up.)

I hope this helps!!!  Have a wonderful day!

Well everybody, it is January and Brittany and I promised we would finish five projects... and guess what...IT HAPPENED!!! At the eve of December 31st I was sewing on the final button for the  Lion Scarf...with a few hours remaining in 2011!  Brittany on the other hand was more organized and finished her 3 projects back in early December.

We will be setting up a new goal for us to keep us both on track.  However, with Brittany back in school and me applying for jobs, we haven't had the chance to figure a new goal out yet.  Stay tuned! Hello everyone, it is Brittany! I finally have a break from concert preparations (I had four concerts this December) and can take some time to relax. On some of my time off I would like to share some of my recent knitting projects.

Today, I am going to talk about the chain-link scarf. This scarf is rather simple and fun to make. One thing I really like about this pattern is that it is made by width instead of height. For some reason I feel like scarves like this go much faster. I am not sure why, but it just works well.

This pattern is very simple and the scarf knits up quickly. I would agree that this is a quick knit, however, you have to make it thiner than the pattern calls for. I do NOT like super thick scarves. They just fit awkwardly and they take too long to knit. Instead of making this 7 chain-links wide I made it just 3 chain-links wide. As you can see in the picture below it fits nicely and is still wide enough to cover your neck. (I have a rather long neck and you can see it covers mine.) I did not find any mistakes in this pattern and I would recommend it to anyone.

As always you can see more pictures of this project and other projects at my flickr account. Have a great day!

Brittany
Posted by Em and Brittany at 12:21 PM No comments: